THE END OF THE BEGINNING, WEAKENING ECONOMIC CONDITIONS AND NEW GROWTH AVENUES

Welcome to The Dispatch’s first edition!

Before I get into this edition’s substance, I’d like to take some time to outline what The Dispatch is, why it exists, what it offers, and who it might be for. (Click to expand)

What The Dispatch Is

My intention is for The Dispatch to provide a clear perspective on China’s digital economy and leading digital players.

There are already lots of stats, market updates, news reports, and stock analysis. The Dispatch won’t replicate these.

Instead, The Dispatch summaries and presents deep thinking on what’s happening in China’s digital economy and where things might be going next. It provides readers context and frameworks to think about ‘big picture’ issues like:

The Dispatch won’t discuss the latest trends, new challenger platforms, or how to market your products in China. If you’re after that, you can follow my daily LinkedIn updates here or sign up to AgencyChina’s regular newsletter here.

Why The Dispatch Exists

But, aside from the time-lag, I don’t think there’s a substantive difference between what’s reported day-to-day:
Company X raises $Y billion, Firm B acquires Firm A, and Firm M announces a plan to launch some ridiculous number of automated convenience stores by year’s end.

Yes, individual article quality varies. But that’s a media reality, rather than an issue with English-language China tech coverage.

Where both English-language and Chinese-language sources arguably suffer is deep thinking about the internet, digitalization, and corporate strategy. Reporting on the day-to-day takes precedence to unpacking interesting questions like:

This is the gap The Dispatch fills.

What The Dispatch Offers

The Dispatch is currently in a pilot phase. I’ll release three articles to test the waters. If the pilot’s successful, The Dispatch will be offered as an annual subscription, with articles delivered fortnightly.

If this article’s been forwarded to you but you haven’t formally signed up for The Dispatch through LinkedIn, then you can do so here.

Image 1: Photograph from an interview I conducted with Meituan’s CMO in 2018 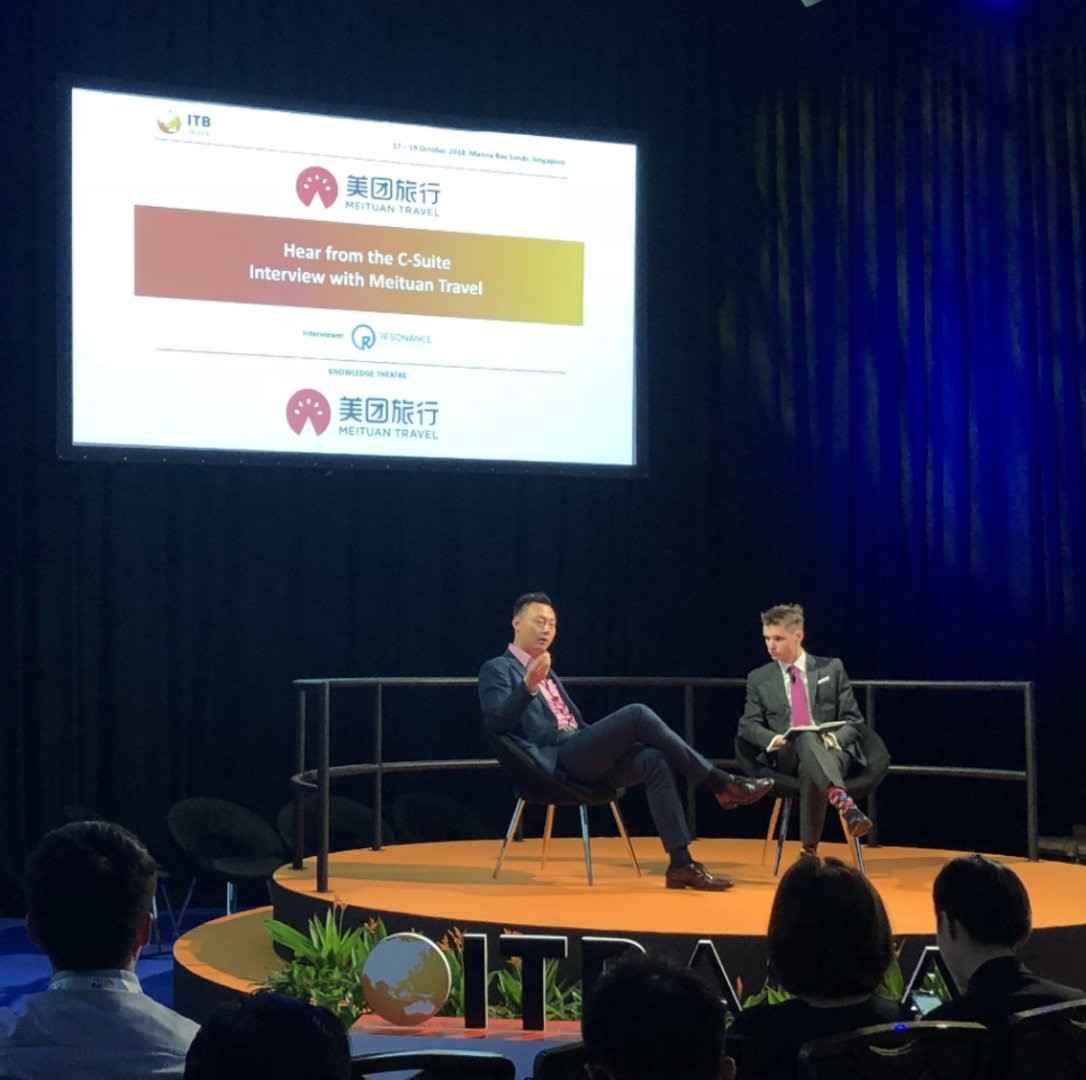 Aside from enjoyment and practical value, it’s my ultimate hope that The Dispatch’s perspectives, frameworks and challenges are taken, built upon and made better.

Who The Dispatch is For

The Dispatch’s for three groups, which I anticipate will overlap or intersect:

[1] The content here is for informational purposes only and should not be taken as legal, business, tax, or investment advice. It does not constitute an offer or solicitation to purchase any investment or a recommendation to buy or sell a security. In fact, the content is not directed to any investor or potential investor and may not be used to evaluate or make any investment.

Now, back to our regular programming…

This edition of The Dispatch looks the end of fast, cheap user growth, economic headwinds and what I think this means for how leading Chinese tech companies seek future growth.

What I hope to present here is a ‘big picture’ framework for you to think about growth and competition in China’s digital economy.

Here’s a guide to this edition’s key points:

I. The various dividends that facilitated fast, cheap user growth are almost exhausted

I. There are various indications of an economic slowdown

II. The Chinese government, academia, business, and private enterprise have reached some level of consensus about the slowdown’s existence

3. As “The End of the Beginning” and slowing economic growth collide, major players are orienting themselves towards new growth

I. There are clear future growth ‘swim lanes’

II. Major players have pretty much settled on their ‘swim lanes’

Between 2010 and 2015, the growth of China’s mobile internet benefited from lots of users coming online, spending more time online and companies having plenty of cash to build products and fight for more users. Three dividends played out simultaneously:

Now, these dividends are close to running out.

The demographic dividend is coming to an end. According to China’s Internet Network Information Center, China has over 770 million mobile internet users. With more users connected to the internet, year-on-year double-digit growth in mobile users has given way to single-digit growth.

Of course, there’s variance by age and geography. Much of the growth in time online is now coming from millennials in China’s third, fourth and fifth-tier cities.

Figure 2: Breakdown of Time on Device Increases Among Millennials and Millennials from Third-Tier and Below Cities 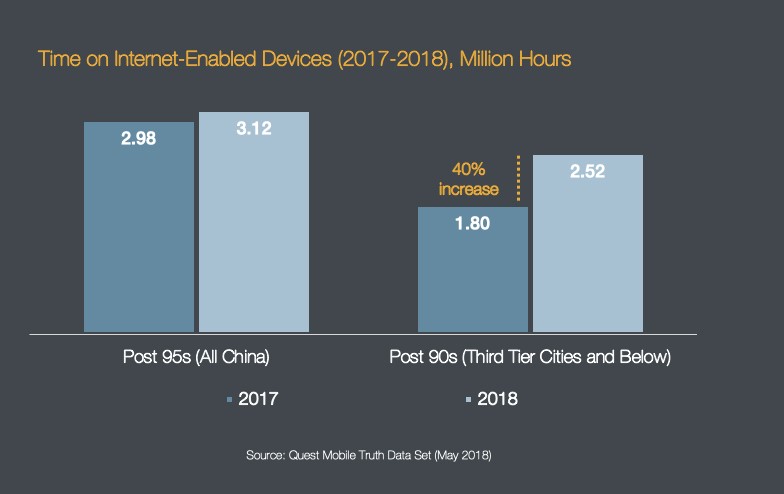 Outside those smaller cities, it’s a zero-sum game for attention and traffic between China’s competing consumer-facing platforms, apps, and digital services.

Lastly, the capital dividend that fueled new products and aggressive customer acquisition may be coming to an end. I have to admit, of the three dividends, what’s happening here is least clear.

Firstly, capital upturns and downturns are cyclical. If there is a downturn, it may only be temporary. Secondly, there are mixed signals as to whether there’s more or less fundraising activity in China.

On the one hand, China now attracts more than a third of the world’s venture capital. It’s reported that last year China’s startup and tech scene gained more funding than all other countries, including the US.

I’ve borrowed graphs that show the two different narratives below.

Figures 3 and 4: A Tale of Two Funding Stories 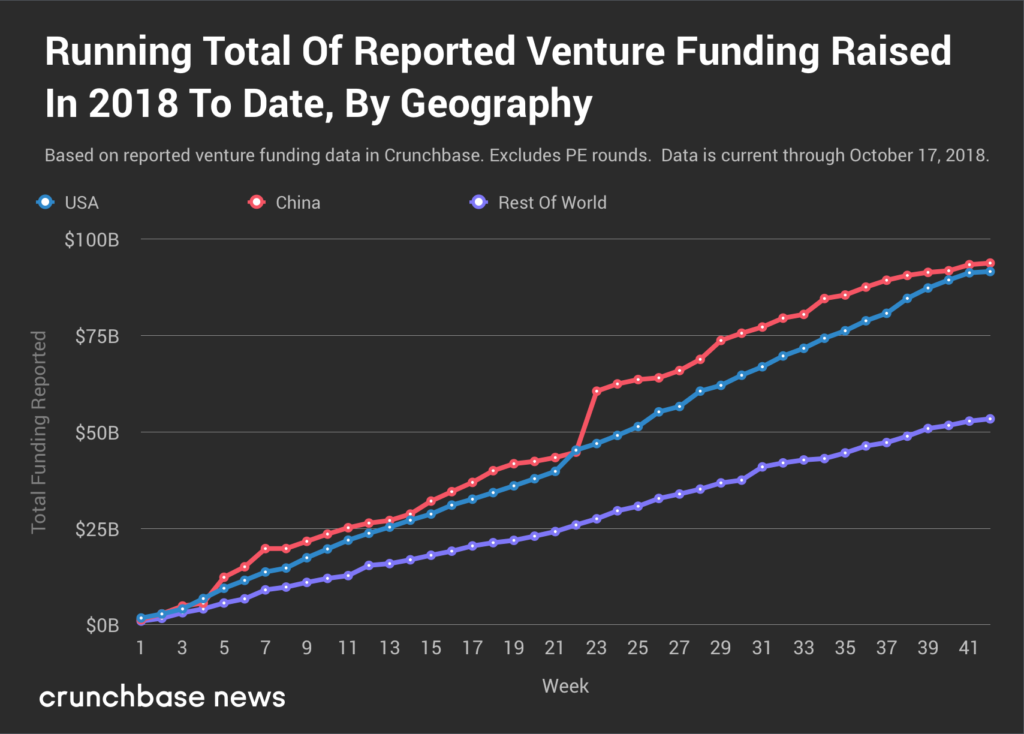 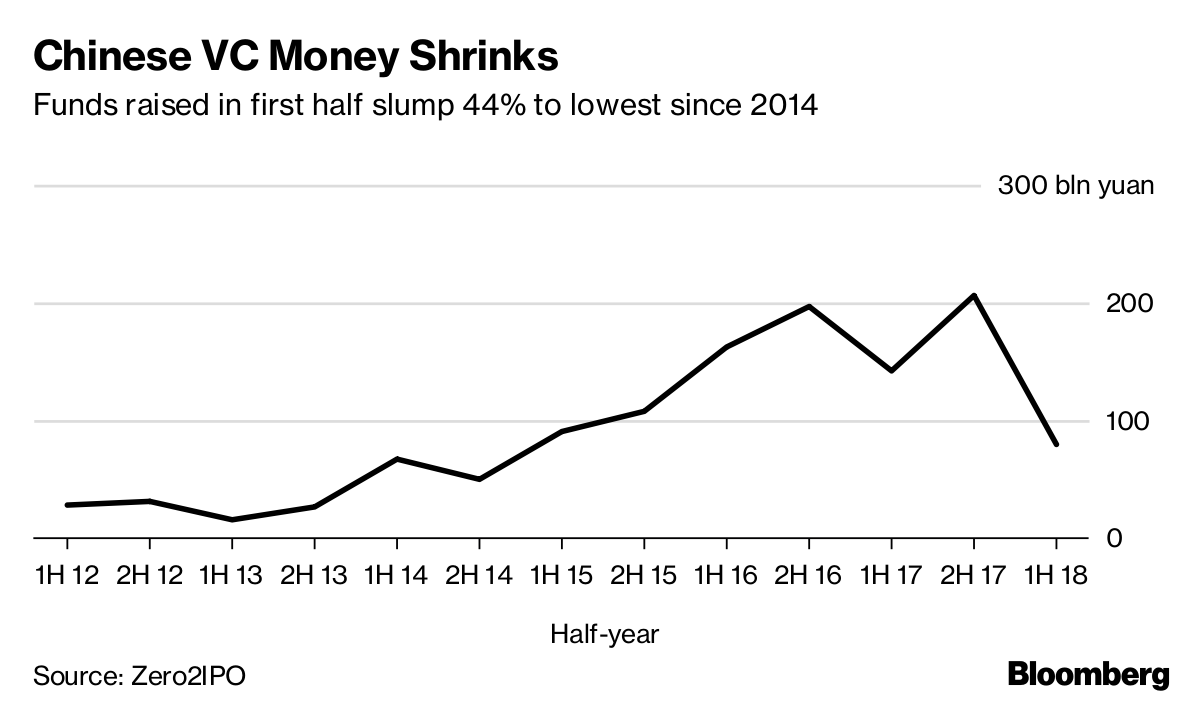 Figure 5: Tmall and JD’s Cost of Customer Acquisition and Average Revenue Per User

As a result of slower growth and higher costs, Wang Xing proposed that China’s internet landscape had entered互联网下半场. 互联网下半场 and Ben Evan’s “The End of the Beginning”, refer to the same point on the technology S-curve – where the market reaches relative maturity after rapid growth. 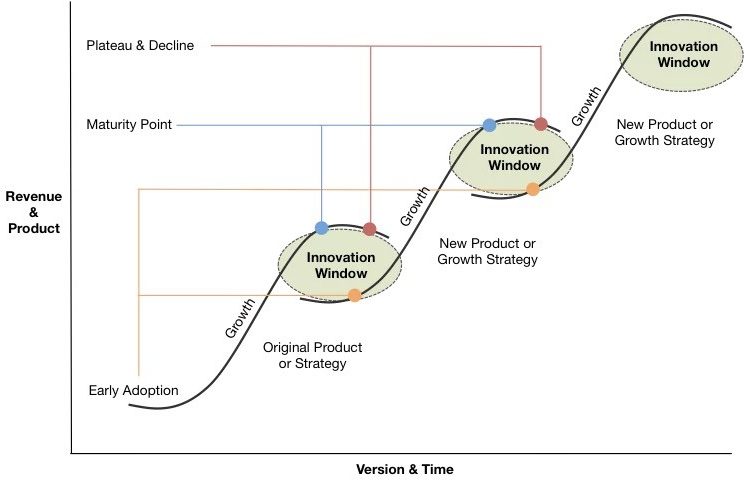 This has a couple of implications. First, the prohibitive cost of acquiring users fortifies established platforms with large user bases. Pinching market share from existing services requires buckets of cash. And, if funding conditions in China are indeed taking a turn, the requisite cash needed is going to be harder to accrue.

Second, under-developed commercial models are going to be tested. Without a high-margin service that effectively cross-subsidizes user acquisition and engagement, digital businesses are at the mercy of their investors’ patience.

Lastly, it should be clear that users are digital companies’ most valuable resource. Working off a slightly tired cliché, if data’s the new oil, then user traffic is an oil field.

At this point, it’s worth noting “The End of the Beginning” isn’t a China-specific phenomenon. Mary Meeker, Ben Evans and others observe that close to three-quarters of adults on the planet now have a smartphone, and half of the world’s population is connected to the internet. Here’s what Mary Meeker said on the topic last year:

In relation to the first question – what white space is left – China’s internet ecosystem still has some (relatively) fast, (relatively) cheap growth in the tank.

China’s new and new-ish internet users, often from smaller cities, are still forming digital habits. This means more time online, as well as decisions on where and how to spend time online. It’s this group that’s formed the backbone of short video and group-buying user bases.

And, as Pinduoduo’s cost of customer acquisition data shows, gaining this group’s attention was relatively inexpensive – at least in the beginning.

This has prompted incumbents and challengers to explore 下沉 growth strategies, which focus on acquiring new users from China’s populous but unevenly-developed third, fourth, fifth and sixth-tier cities.

Further complicating “The End of the Beginning” is worsening macroeconomic conditions. This places further pressure on growth trajectories and business models.

I’m very much underqualified to discuss economics generally, let alone the complexity that exists in China’s economy. Accordingly, this section will be brief and factual.

I. There are various indications of an economic slowdown

Between July and September 2018, China’s GDP increased at the slowest rate since 2009.  China’s GDP growth target for 2018 was 6.5%, and it’s rumored 2019’s growth target will be around 6 percent. The World Bank and International Monetary Fund have each revised down their estimates for China’s economic growth over 2019.

Factory activity is at its lowest level in two years. New factory orders have also decreased, suggesting factory activity won’t pick up in the immediate future.

There’s evidence consumers are tightening their belts. Car sales are down, property prices are sagging and retail growth is at its lowest level in more than 15 years. Wang Bin, a Ministry of Commerce official, projects domestic consumption will contribute two-thirds of China’s GDP in 2019, down from three-quarters in 2018.

II. The Chinese government, academia, and business have reached some level of consensus around the slowdown’s existence

Chinese government, academia, and business acknowledge the economic slowdown’s existence. However, these groups differ in their assessment of China’s vulnerability to further and persistent downturn.

China’s academics have pointed out structural and non-structural issues affecting China’s economy, which include trade tensions with the United States, debt, a declining private sector economy, and the RMB’s valuation.

3. As “The End of the Beginning” and slowing economic growth collide, major players are orienting themselves towards new growth

Although “The End of the Beginning” and economic headwinds pose their challenges, I think there are clear bright spots for future growth. I also think it’s now pretty clear where Baidu, Alibaba, Tencent, Toutiao, Meituan, Didi, Pinduoduo and JD are placing their bets.

I. There are clear future growth ‘swim lanes’

After Wang Xing proposed “The End of the Beginning”, he saw three strategic directions firms could take (互联网下半场的三个方向):

In total, we’ve got six broad directions that major players Baidu, Alibaba, Tencent, Toutiao, Meituan, Didi, Pinduoduo and JD can move in to shape digital behavior, compete for white space, transform industries and race toward the next biggest growth opportunity after the mobile internet.

One of the truly interesting things about “The End of the Beginning” is the interplay between the post-digital and pre-digital economy, and whether distinctions like ‘pre-digital’ and ‘post-digital’ even matter anymore. As Tom Goodwin put it:

Before, these companies were praised for the genius of building a thin layer of horizontal services on top of massive businesses with fixed assets. They added value to vast audiences with relatively few staff and no assets. What we now see is how they’ve had to build foundations, offer more services and add depth to their offering — these companies have moved from facades to edifices.”

II. Major players have pretty much settled on their ‘swim lanes’

Over 2017 and 2018, a number of key players restructured to strengthen core business offerings and better orient themselves to future growth opportunities.  Most restructures were also accompanied by instructive visions about where future strategy is headed.

When you take that information and map the big players across the six growth buckets above, you get a fairly good sense of who’s competing where for future growth.

Despite the hyperbole around China’s BAT, only Alibaba and Tencent are competing across the board. When you break each of these buckets down, and map individual chess pieces, you get an even more granular sense of where competition exists and where it’s heating up. It’s a moving feast, and kudos to the firm(s) that keep track of the flurry of M&A activity across each sub-sector.
There’s little doubt about what comes next. The stage is set and curtains are raised for a new wave of competition.
“The End of the Beginning” and uncertain economic conditions ups the competitive stakes between major players, places a premium on good strategy and raises the cost of failure. It’s a fascinating period to observe China’s digital landscape.