The World Cup a golden opportunity for marketing

Marketing based on sport events has been popular for a long period of time, and the trend has become increasingly robust compared with previous years. During FIFA World Cups, both brands related to sports, such as Nike and Adidas, as brands non related to sports, such as Coca-Cola, McDonalds, Amazon, and Durex, are busy launching a series of World-Cup themed marketing activities through digital marketing channels. From the perspective of corporate brand marketers, the World Cup is without doubt a golden opportunity for marketing activities.

Football fans like to share what they see and hear on social media, which enables social media to play a role in sportevents. Take the 2014 World Cup in Brazil for example. Statistics showed that, apart from the audience watching the football matches on TV, there was a large audience watching online. In 2014, the World Cup online audience reached 489.000 people. In 2014, that number skyrocketed to 783.000 people. During the 2010 FIFA World Cup in South Africa, the average number of monthly active users reached 500 million and 200 million on Facebook and Twitter, respectively. In 2014, these numbers rose to 1.28 billion and 255 million, respectively. Besides this, around 60 million photos were shared on Instagram, and the average number of monthly active users exceeded 200 million. From the perspective of user interaction media, social media is enjoying growing popularity among users. In 2014, 141 million Facebook users had in total 459 million times of interaction activities (including comments, likes and sharing) related to the World Cup. This total number exceeds the total of the 2014 Winter Olympics in Sochi and the 2014 Super Bowl.

Besides the active use of social media by means of commenting, liking and sharing, social media has also become an important source for football fans from where to get photos, news, information and rumours about their favourite football teams and players. This automatically raises the question how brands can achieve successful marketing through these popular sportevents, in order to improve brand awareness and increase revenue. In the run up to the Brazil World Cup in 2014, Durex launched a series of activities involving the World Cup to enhance sales. Through their WeChat account, they launched the “World Cup Limited Set”, “The Durex Gift Box”, and other activities that cleverly combined their brand’s products and the World Cup theme, using a World Cup exclusive gift as an incentive to connect with the popular topic and promote product sales.

At present, even though the Chinese national football team failed to qualify for the 2018 FIFA World Cup in Russia, Chinese firms are already planning promotional activities related to the global sporting event to boost sales. Home appliance maker Hisense, for example, presented its World Cup Tv at the Canton Fair in Guangzhou. This customized ULED TV, with several pre-installed World Cup apps including the official FIFA World Cup app, is scheduled to go on sale worldwide in April 2018.

Although promotional activities, competitions, lucky draws and exclusive content are great ways to attract fans, raise brand awareness and improve sales, it is important to remember that these kind of content or incentives used to increase conversion require innovative thinking and execution across the right channels. The importance of social media combined with popular global events is evident, but only when designed and executed properly. 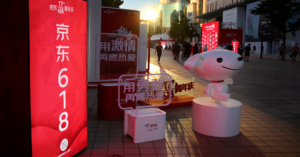