In her coffee shop in downtown Beijing, Zhang Lanlan busily serves customers who stop in during lunch hour. After living in South Korea for about eight years, Zhang returned to China in 2016. Looking to start a business in the city and noting the growing popularity of coffee, she decided to open a coffee shop. The decision seems to have been a smart one, as media reports estimate that the coffee shop market in China is expected to grow to $12 billion by 2022.

Of course she faces stiff competition.

Starbucks came to the Chinese mainland in 1999. Currently, the chain has more than 3,300 shops across 141 cities in China, with a new store opening every 15 hours. Holding the No.1 position in China’s specialist coffee market, Starbucks’ 58.6 percent share in the market is worth $4.72 billion in 2017, according to Euromonitor International.

Other chains such as Costa Coffee and Pacific Coffee are also trying to grow their market share, seeing the huge demand and potential for growth. 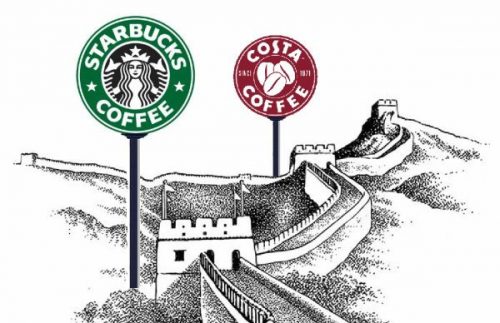 Tea culture in China, the birthplace of tea, can be traced back to 5,000 years ago. Originally drunk for medicinal purposes, it became a common recreational drink during the Tang Dynasty (618-907).  Today, tea is the go-to beverage for many Chinese.

The culture that formed around drinking tea also gave birth to tea ceremonies and numerous written works dedicated to the beverage. For example, The Classic of Tea, the first known monograph on tea, was written by Chinese writer Lu Yu during the 8th century.

In recent years, however, traditional tea has encountered a new challenger as coffee, the popular Western drink, has been infiltrating the Chinese market and gaining ground with China’s younger demographic.

According to data from the International Coffee Organization, China’s coffee industry is expected to maintain an annual growth rate of about 15 percent – as high as 30 percent in first-tier cities – much higher than the 2 percent growth rate seen in the rest of the world.

Many young Chinese now turn to a cup of coffee to refresh themselves while working or studying.

Hope Tung, a young woman working in Beijing, is one of them.

“I’m a loyal customer of Starbucks. I like the sweet taste that comes after that first bitter sip,” Tung told the Global Times.

As coffee lovers in China become more and more discerning, they are no longer satisfied by what automatic coffee makers can provide and are now turning to higher quality products.

Facing this demand, coffee shops are doing everything they can to provide exceptional menus. Innovative products have become the best weapon to beat out homogenous competition, leading to different types of coffee shops to gain a foothold in the Chinese market. 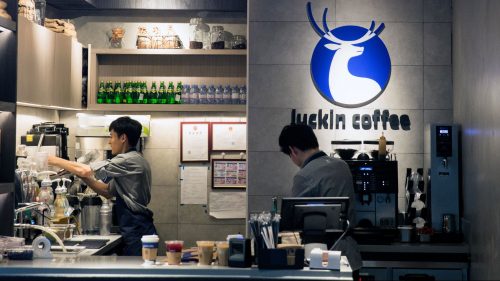 Luckin Coffee, which began operations earlier this year, sells on-demand coffee through its own specialized app. Since entering the coffee battlefield, the company has developed at a rapid pace.

The company has 1,099 shops throughout 13 cities in China and recently teamed up with technology giant Tencent to continue taking on the rapidly growing coffee-drinking market in the country.

Different from traditional coffee brands, Luckin is focused on its delivery business. About half of its shops are take-out only, and through its app and delivery channels, the company promises to have a cup of coffee in a customer’s hands in around 18 minutes.

This convenience has gained the attention of a lot of coffee drinkers, especially young consumers. By the end of August, the company had served about 3.5 million customers and sold 18 million cups of coffee.

On social media, netizens in China have different views of the new brand. While many applaud the convenience and quickness of delivery, others find that the quality of the coffee is still not comparable to other brands.

The AgencyChina team was not involved in the creation of the content. 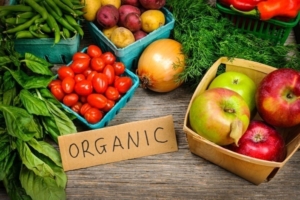 Chinese Consumers Understanding of 'Organic' is Just Getting Started